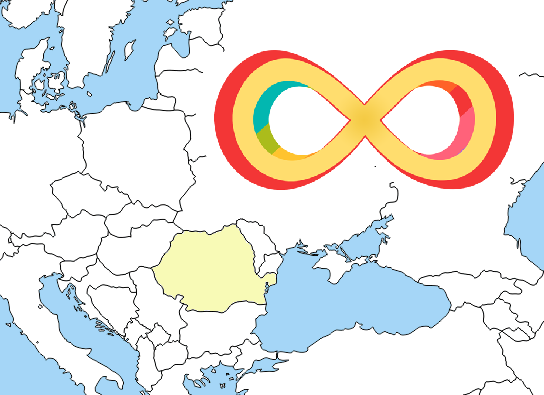 The challenges faced by autistic people in many eastern European countries can be very different from those in the English-speaking world and western Europe – where autistic groups and communities, and services for autistic people have had more time to develop and take root. These differences are illustrated by the experiences and work of autistic activist Ovidiu Platon from Romania, who strives to bring autistic adults together and to inform the families of autistic children in his country.

Ovidiu Platon, autistic self-advocate and founder of suntAutist, lives in Timișoara, Romania. Ovidiu has pursued a wide range of interests in the course of his studies and professionally, including philosophy, permaculture, painting, design and marketing.

Ovidiu currently makes his living in the fields of marketing strategy and special effects for film.

He also has some training in psychotherapy, adding professional knowledge to his personal experience of autism and neurodivergence in general.

Getting an autism spectrum diagnosis as an adult in Romania is close to impossible. Ovidiu has knowledge of one psychologist and her team who have been offering adult diagnostic services since August 2021. However, in addition to her team’s apparent lack of resources, in Ovidiu’s words, ‘they are receiving a lot of hate from the community‘. In Romania, anyone over 18 is usually not seen as autistic but as potentially needing a mental health-related diagnosis such as schizophrenia or bipolar disorder.

Recently, Ovidiu has been enquiring amongst EUCAP’s member organisations about adult diagnostic services that might enable Romanians to be diagnosed. He has been asking whether it could be possible for clinicians in other European countries to offer autism diagnostic services online. However, clinics willing to provide this have turned out to be extremely difficult to find.

In addition to those living in Romania and unable to travel abroad for a diagnosis, there are large numbers of Romanians living and working in many countries across Europe who have difficulty locating clinics willing to take them as clients. They face prejudice and language barriers, but Ovidiu has faith in their persistence:

Romanians are resourceful. If someone is in Venice, and they hear that there is somebody in Milan who is at least ok with giving a look and giving a kind approach, they will go. They left Romania to get a better life, so there is no problem getting to another region to get a second opinion.

Ovidiu’s own path to diagnosis was no exception. He had not suspected he could be autistic for most of his life, even when studying psychotherapy. The deficit model of autism he had read about in academic literature was unrecognisable to him in terms of his actual life experience.

Ovidiu finally made a tentative self-diagnosis after watching a YouTube video in which an autistic person described his own experience. However, after calling over 40 professionals in his home country, he concluded that none were willing to diagnose autism in an adult. Some simply hung up on him; some suggested that he was delusional for thinking he was autistic. He was only able to get formally diagnosed after travelling to the United Kingdom.

In July 2021, Ovidiu travelled around Europe, visiting autistic communities in the Netherlands, Malta, Finland and Estonia. Following his diagnosis, he had become increasingly aware of the lack of an autistic community or neurodiversity culture in Romania. Ovidiu felt that it was necessary to build this capacity from the ground up. To this end, he sought in-depth knowledge of how autistic-led groups and organisations functioned in different countries.

In Ovidiu’s view, for historical reasons, learned helplessness is a common trait in Romanian culture. It remains difficult for the population to organise at the community level, and this is particularly evident in the disability sector. For now, Ovidiu has the impression that none of the solutions he has observed elsewhere could be replicated in Romania and therefore, he should remain in the role of a resource gatherer. He feels that the nascent Romanian autistic community needs to create an initial identity and develop itself further before a more formal organisation can emerge. Ovidiu’s current strategy involves facilitating the creation of online self-care and peer support groups. Such groups could allow autistic Romanians and their families to engage in wide-ranging discourse and talk about their experiences, generating positive narratives, rather than focusing on feelings of anger and disappointment which can easily dominate discussions.

Knowledge about autism and neurodiversity

Ovidiu also has two further goals. He wants to bring more information about autism into Romania, and he wants to integrate autistic Romanians into autism research in Romania and abroad.

The word ‘neurodiversity’ has not been adequately translated into Romanian, and neither have the vast majority of foreign works on autism and neurodiversity. In general, Romanians do speak English – but unfortunately, most of them not at an information-gathering level, only at a level sufficient for social conversation. Ovidiu feels that they tend not to see English-language concepts or texts not published in Romanian as relevant to their own lives.

Autism is generally seen by Romanians as a sickness to be cured. There is widespread ignorance of evidence-based autism interventions. Applied Behaviour Analysis (ABA) is available. There is also a plethora of other services offered by poorly qualified practitioners. These range from approaches involving judo or horses to therapies such as neuro-mapping, angel therapy, and other pseudo-scientific or belief-based therapies. Many people claiming to treat autism only have online diplomas and receive zero oversight for their work. Parents of autistic children often do not know their rights and are encouraged not to question the offered care.

Going forward: a focus on information, resourcing and improving regulation

Ovidiu’s work on improving understanding of autism and combating misinformation in Romania focuses on suntAutist, which comprises a Facebook group and a blog. In October 2021, the group has around 5800 members, most of them parents, plus about 20 active autistic people. 50 to 60 of the parents regularly contribute to the group, whilst the rest silently observe. The blog has about 10,000 monthly readers.

The high demand for the suntAutist resources speaks of a widespread need for more knowledge and services, as well as for regulation of autism care in Romania, where there is little government focus on how autistic children are treated. Legal oversight of who treats children and what treatments they receive is urgently needed.

Ovidiu is currently working on developing new resources to help parents and professionals spot bad therapists and therapeutic approaches. He is also developing guidance for parents on the concept of neurodiversity, hoping to foster understanding and a general shift in the way autism is viewed.

Despite encountering many challenges, Ovidiu and his neurodivergent friends want to live and develop their community in Romania. The constant attention they are getting from large numbers of families and the thirst for new knowledge they are witnessing are encouraging signs of great potential for change.

We have gathered from kind of everywhere – from different parts of Romania. That’s why I wanted to do it online because it’s impossible to do it locally right now.

We are kind of sick of things going like this and wanting something to change because we actually like it here. We like living here, we want to grow our children here, we want to develop here, but we can’t.

Basic information about EUCAP in Romanian